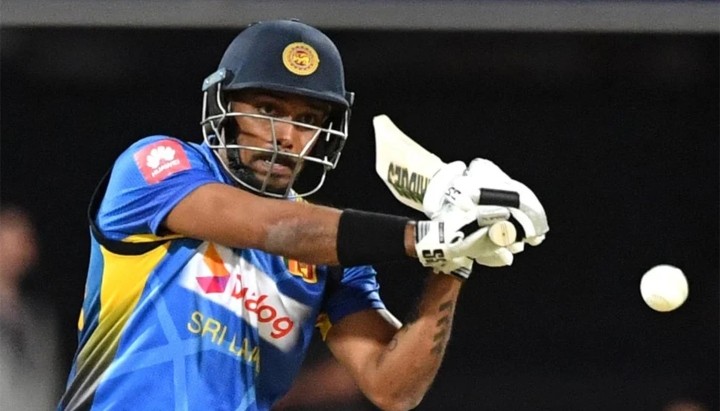 Sri Lanka's top order batter Danushka Gunathilaka has been arrested in Sydney, according to reports, for rape. The player, who travelled with the Sri Lanka team for the T20 World Cup in Australia, was ruled out of the tournament with an injury.

He, however, remained with the squad despite being officially replaced by Ashen Bandara.

Gunathilaka had injured his hamstring and the tear forced him out of the T20 World Cup.

The left-handed batter has played more than 100 international matches for Sri Lanka including their opening match of the 2022 T20 World Cup against Namibia that they lost.

Gunathilaka has been involved in a similar incident in 2018 when Sri Lankan cricket suspended him for misconduct. Police had questioned the player and his friend over the alleged rape of a Norwegian woman in Sri Lanka.

Then, though, the police dismissed Gunathilaka's involvement, staying that the player had no personal involvement in the case in which one of his friends had been arrested.

The ABG Limited extended their hands to support the National Women’s Football Team to make the team's progress easier toward the success in football.

Morocco may not have reached the World Cup final but the players and supporters can take pride in the fact that they will leave Qatar having played seven games, a first for any African nation, coach Walid Regragui said on Friday.

Morocco's dream run at the World Cup ended when they were beaten by reigning champions France in the semi-finals but they still have the opportunity to leave Qatar on a high when they take on Croatia in the third-place playoff on Saturday.

Regragui said he would not make too many changes to the squad as that would upset the team balance but admitted it was a difficult and complicated game for two teams being asked to play after the disappointment of losing their semi-final matches.

"I understand it's important to finish third rather than fourth, but my takeaway is we didn't reach the final... We wanted to play the final on Sunday, not play tomorrow," Regragui said.

"But I told my players this is our seventh World Cup game. If you told any Morocco fan we would be playing our seventh game on December 17, they would be proud.

"Morocco played six World Cup games in 20-odd years and now we've played six games in a month - this is priceless. It's as if we played two World Cups or even more, that's beautiful from an experience point of view."

Regragui said Croatia were a formidable team even if they had not been favoured to repeat their 2018 run, when they finished runners-up in Russia. Their dreams were crushed by Lionel Messi's Argentina in the semi-final.

"We knew Croatia were going to be one of the best teams in the competition. After the first game (where Morocco and Croatia drew 0-0 in the group stage) we knew the performance was very good," Regragui said.

"A lot of people said Croatia were approaching the end of their cycle and would have the rug swept out from under their feet. Croatia got stick for not beating 'underdogs' Morocco but both teams reached the semi-final.

"There was a lot of hesitation for the first game... Both teams will want to win it (on Saturday) and it will be a great game."

The game could be Croatian midfielder Luka Modric's last with the national team and Regragui praised the Real Madrid man who is still going strong at 37.

"I don't know if it's Modric's last game, he's a competitive warrior and will want to finish his World Cup in style. When he wants to finish on a great note, we should be wary," Regragui said.

"Hats off to Modric. What he's doing at 37 is monumental. He was a Ballon d'Or winner and I completely understand why."

'There was no disrespect': Tite says he couldn't resist a dance after goal 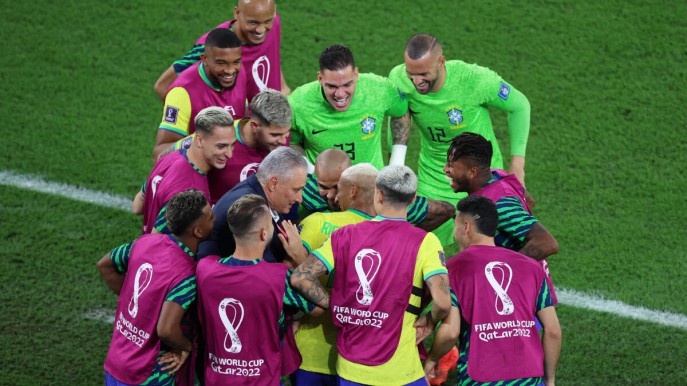 Brazil coach Tite said his dance celebration during his side's emphatic 4-1 World Cup win over South Korea on Monday was an expression of pure joy at his side's bold attacking performance, and would help him bond with his young team.

Brazil's players rushed over to the dugout after Richarlison put the five-time world champions 3-0 up inside 30 minutes of their last-16 encounter with South Korea, and Tite briefly joined in their dancing.

"We try to adapt to the characteristics of the players," the 61 year-old said when asked about his moves at a news conference. "They are very young and I try to adapt a bit to their language, and part of their language is dancing."

He said his players told him before the game that they would make him dance with them if they scored.

Not everyone was impressed. Former Manchester United captain Roy Keane, speaking on Britain's ITV television, said: "People say it's their culture. But I think that's really disrespecting the opposition."

Tite was at pains to stress that was not the case.

"There's no interpretation other than happiness at the goal, happiness for the team, happiness for the performance," he said. "There was no disrespect for the opposition nor towards (South Korean coach) Paulo Bento for whom I have a lot of respect."

Brazil raced into a 4-0 lead over South Korea before halftime with goals from Vinicius Jr., Richarlison and Lucas Paqueta plus a Neymar penalty. The match ended 4-1 after substitute Paik Seung-ho got a consolation goal for the Asian side.

Brazil will face Croatia in the World Cup quarter-finals on Friday. They beat Japan on penalties earlier on Monday after their last-16 tie finished 1-1. 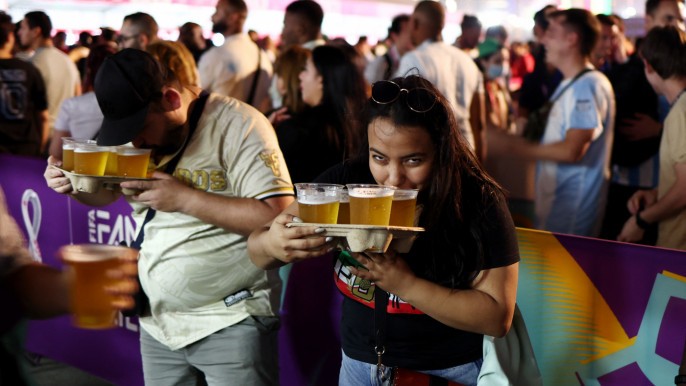 Football fans who travelled thousands of kilometres to get a glimpse of the sport's most prestigious event savoured their first sips of beer at the launch of a fan festival on Saturday, a rare place where they can drink alcohol at the World Cup.

In a last-minute U-turn, two days before the tournament's opening match, the international football governing body Fifa said on Friday that alcoholic beer would not be sold at Qatar's World Cup stadiums.

Budweiser, a major World Cup sponsor, had been set to exclusively sell alcoholic beer within the ticketed perimeter surrounding each of the eight stadiums three hours before and one hour after each game during the month-long event.

Now fans can only consume beer at the Fifa Fan Festival in Doha. Alcoholic beverages remain available at the stadium hospitality areas.

One Mexican fan in a sombrero, his country's tricolour flag draped over his shoulders, balanced a cardboard drink holder containing four beers as he joined a group of his compatriots at Doha's Al Bidda Park, hosting the Fifa Fan Festival.

"Not having alcohol is not good because the World Cup it's a party of the world," said Brazilian fan Julio Cesar, wearing a felt hat in his country's colours.

The 2022 World Cup is the first edition of the tournament held in a conservative Muslim country with strict controls on alcohol, the consumption of which is banned in public.

Qatar has also faced criticism from some countries playing in the 32-nation tournament over its rights record on migrant workers, women and the LGBTQ community.

For the fans unfazed by Qatar's dire human rights record, the absence of beer at World Cup venues has proven a major disappointment.

"It's tough to tell what happened in Qatar, whether it is the truth or not," said 41-year-old Guilherme, another Brazil fan.

"My only problem is banning alcohol."

Sadio Mane out of World Cup, to begin rehab in Munich 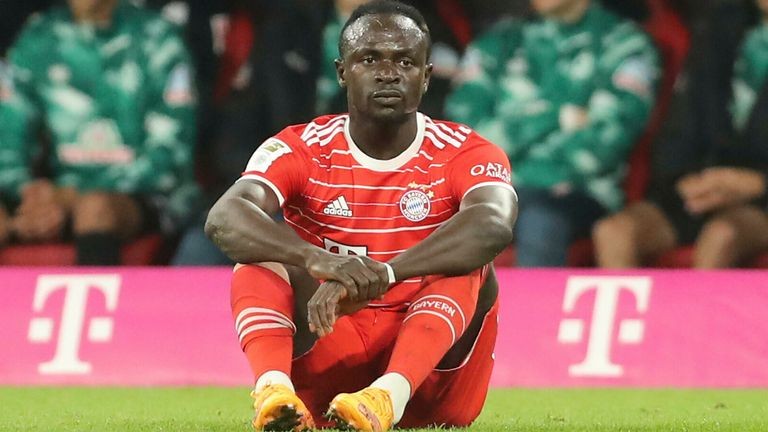 Senegal star Sadio Mane has lost his race to be fit for the 2022 World Cup and has been withdrawn from their squad, the country's football federation announced on Thursday.

His club Bayern Munich added later that the 30-year-old, who was voted second in the Ballon d'Or last month behind Karim Benzema, had undergone "successful surgery" in Innsbruck where "a tendon was reattached to the head of his right fibula".

Bayern said Mane "will begin his rehab in Munich in the next few days".

The absence of the talismanic Mane is a massive blow to the Senegalese. He scored the winning penalty in a shootout victory against Egypt in the African Cup of Nations final and repeated the feat against the same opponents to qualify the Lions of Teranga for the World Cup.

Mane was voted African footballer of the year for his feats, and has scored 33 times in 92 matches for Senegal.

He picked up his shin injury playing for Bayern earlier this month but was named in the World Cup squad in the hope he could regain fitness.

But on Thursday Senegal said the former Liverpool star would not make it.

"Unfortunately, today's (Thursday) MRI shows us that the improvement is not as favorable as we imagined and unfortunately we have to withdraw Sadio from the World Cup," said team doctor, Manuel Afonso in a video on the official Senegal Twitter account.

Senegal had originally hoped the forward would be fit in time for their opening game on November 21 against the Netherlands.

They will also take on hosts Qatar and Ecuador in Group A.

Senegal football federation chief Augustin Senghor told AFP Thursday there was no panic over the loss and said the player's health had been paramount in their decision.

"We have been ready for this since the news of his injury," Senghor said.

"We had been waiting for new test results and when they came in we all agreed his health had to come first."

When asked how the team had taken the blow Senghor replied: "Zen".

But Senegal international Pape Gueye told AFP that Mane would be missed.

"Mane is irreplacable," he said.

"But we do have other options on the flank, and that's a ray of hope on a dark day for Senegal."

After naming Mane in his World Cup squad a week ago, coach Aliou Cisse was optimistic but cautious.

"Losing Sadio Mane is not an easy thing for a coach, for the team, even for African football," he said.

Mane had been in Munich receiving treatment with his club.