Today, the black day of assassination attempt on Sheikh Hasina in Ctg 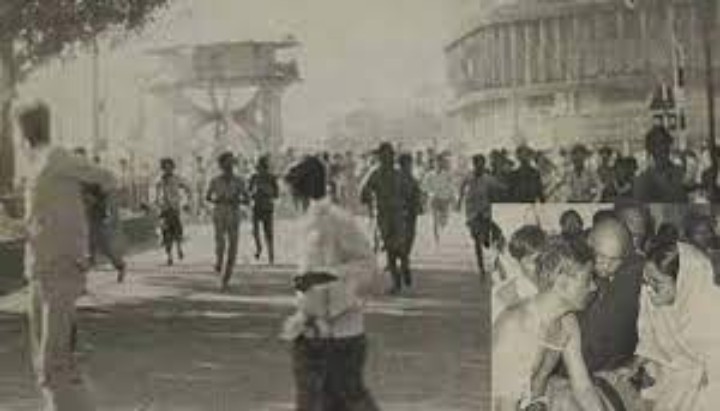 Today is January 24. On this day in 1986, Awami League President Sheikh Hasina formed an intense movement against dictatorship. He visited Chittagong as part of that movement. At that time, Sheikh Hasina's convoy was attacked in Chittagong under the leadership of Rakibul Huda, a police officer of the petty forces of the dictatorship.

In the intense movement against Ershad, Bangabandhu's daughter and Awami League president Sheikh Hasina's Chittagong rally took the streets with a huge crowd. While Sheikh Hasina was on her way to the rally site, the police stopped Sheikh Hasina's convoy at the corner of Muslim High School. Suddenly a shot was fired at Sheikh Hasina. At that moment, Abul Hashem, a Juba League activist, lost his life in the firing while trying to save Sheikh Hasina. Then the police violence started. The lawyers somehow took Sheikh Hasina to the court building.

There were several attempts to assassinate Awami League President Sheikh Hasina. But with the love of the people and the grace of the Creator, she has come back again and again from the gates of death. This incident in Chittagong was also a manifestation of it. 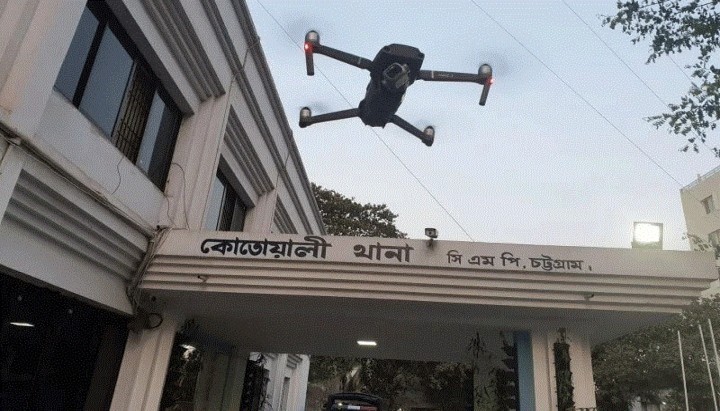 Police have arrested 49 Jamaat-Shibir leaders and activists from Teri Bazar area of Kotwali Police Station in Chittagong on charges of holding a secret anti-government rally.

They were arrested Monday night (May 16) at a restaurant called Al Bayan. Officer-in-charge (OC) of Kotwali Police Station Jahidul Kabir confirmed the matter.

He said that he had come to know through secret information that Jamaat-Shibir activists were holding a secret meeting at a restaurant in Teri Bazar area. Later, 49 leaders and activists of Jamaat-e-Islami including Amir of Kotwali police station were detained in a raid. Details on this will be given later.

Earlier, police have arrested 45 Jamaat leaders and activists on Sunday (May 15th) at around 12:30 pm on charges of holding a secret anti-government rally from Maizdi Al Farooq Academy in Noakhali district town.

BNP themselves doesn't know what they wants 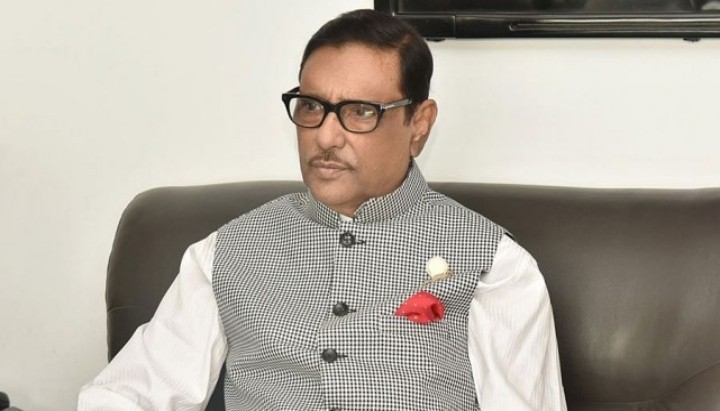 Awami League General Secretary, Road Transport and Bridges Minister Obaidul Quader said, "People today are confused to see the demands of BNP leaders." People wants to what does BNP really wants. Which they themselves do not know. The BNP is demanding a caretaker government, sometimes neutral and sometimes a national government. That is why people are confused, he said.

He made the remarks at a briefing at his residence on Sunday (May 15) morning.

"People are looking at BNP leaders", in response to such statement of Mirza Fakhrul Islam Alamgir, Obaidul Quader said, in fact people are not. There is no point in people looking at a party that has failed in a movement, failed in election and even failed to create a procession for the release of the party chairperson.

"The country and the nation are going through a transition period", in response to such remarks of the BNP secretary general, he said, "In fact, the BNP is going through a critical period, not the country or nation."

Obaidul Quader further said, "It’s better if BNP come to the streets without any secret conspiracy. We welcome any of their peaceful political activities." 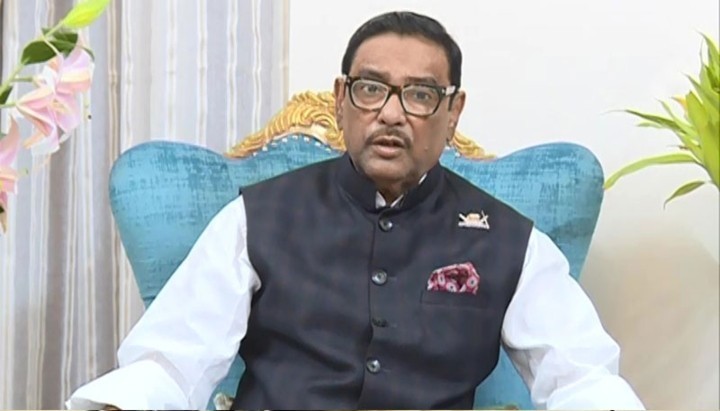 Awami League general secretary Obaidul Quader has criticized the recent statement of the BNP secretary general on the Sri Lanka issue and said that Mirza Fakhrul failed in the election. The movement also failed. And you are still in charge, why not jump into the Bay of Bengal?

He made the remarks in response to a question from reporters after the 111th board meeting of the Bangladesh Bridge Authority at Setu Bhaban in the capital Mohakhali on Wednesday (May 11th).

Obaidul Quader said, ‘Fakhrul, you are still in charge? ‘He can’t hold a conference on time. He should resign and jump into the Bay of Bengal.

Obaidul Quader said that some political parties in Bangladesh are complaining about the situation in Sri Lanka but the reality of Bangladesh and Sri Lanka is not the same. The BNP is hiding behind various issues to cover up its failure. 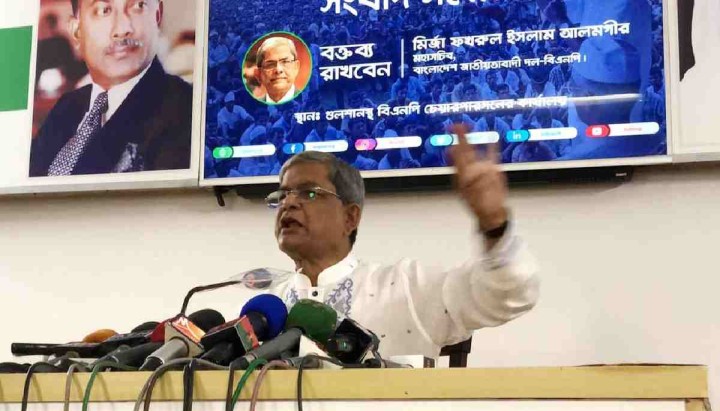 BNP Secretary General Mirza Fakhrul Islam Alamgir on Sunday said their party even will not join any talks on the next parliamentary polls until the Awami League government quits power.

“I think there’ll be no talks until the Awami League government resigns,” he told a press conference at BNP Chairperson’s Gulshan office.

The BNP leader came up with the remarks as journalists drew his attention to a reported decision of the Awami League Central Working Committee to make all-out efforts to bring BNP to the next parliamentary election.

Fakhrul renewed their party’s stance that BNP will not join the next polls under the current government.

“Our position on the next polls is clear. There’s no question of holding an election if the Awami League regime does not resign and power is handed over to a completely neutral government.  We won’t go to the polls, if Sheikh Hasina remains in power,” he viewed.

Fakhrul said the government must meet two conditions to bring BNP to the next polls. "The first condition is that they (govt) must resign and hand over power to a neutral non-partisan government."

He said a non-party neutral government will reconstitute the Election Commission for conducting the polls based on public opinions and thus a government and parliament will be formed representing the country's people.

Sought his comment on Awami League General Secretary Obaidul Quader’s comment that the opposition parties would be given a scope to hold meetings and rallies, Fakhrul said Awami League is a party of frauds. "They are used to say like that…but they’ll do whatever they need to do.”

BNP will have to come to the polls to survive: Obaidul Quader 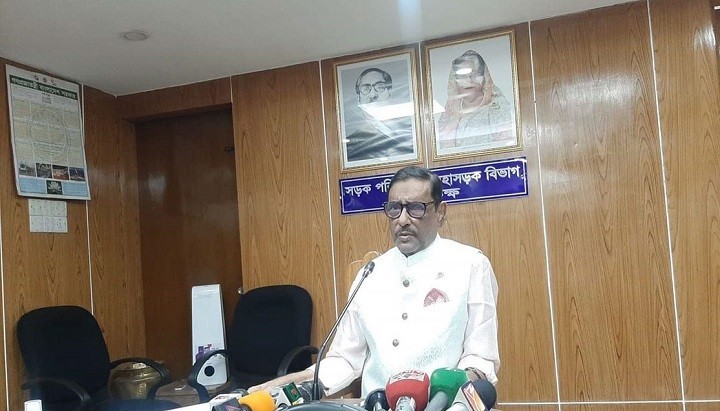 Awami League General Secretary and Minister for Road Transport and Bridges Obaidul Quader said, "They (BNP) will have to come to the polls to survive. We also want to welcome a strong opposition in Parliament. I want the opposition to have a stand. '

He made the remarks while talking to reporters at the Secretariat on Sunday (May 8) at around 12 noon.

Referring to the comment of Mirza Fakhrul Islam Alamgir, “An unelected government must relinquish power”, Obaridul Quader said that, 'These are old songs, nothing new. There is no benefit saying this right now. Their people are also in the Parliament. BNP has sent members to parliament, are they unelected? The speaker gives them a chance to speak. The Prime Minister also wants them to come. We are also giving importance. Mr. Fakhrul himself has become unimportant, he could have spoken loudly in Parliament if he had been in Parliament.'

"The prime minister has openly said that all parties should come to the polls," he said. I want an election with all parties including BNP. I guarantee the election will be fair. Voting will be held in EVM and the Election Commission will be neutral. Mirza Fakhrul has no reason to worry.'

Asked if there would be any initiative to bring the BNP to the polls, Quader said, "We will tell them to come to the polls. Although it should not be said. It is their right to come to the polls. It's not a matter of opportunity. If the BNP does not exercise its rights, their existence will be in crisis and I believe they will not create such situation.'

The general secretary of the Awami League said, 'Looking at the upcoming elections and the conference, the party president has asked us to make preparations." She has asked to organize the founding anniversary of Awami League on 23rd June. She also directed to prepare election manifesto by updating the manifesto. Expired district-upazila conferences have to end before the national conference.'