BNP's words and deeds do not match: Quader 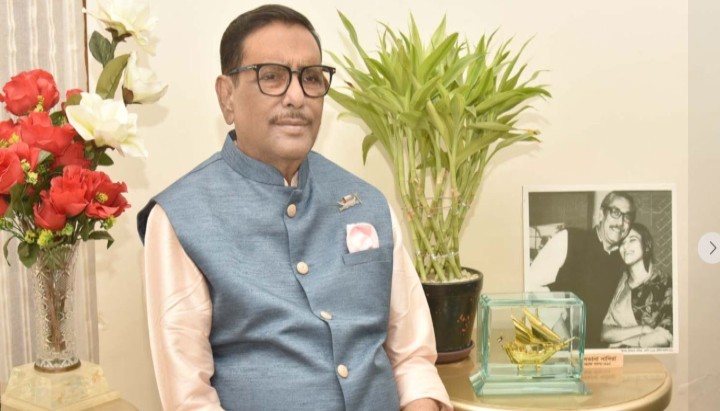 Awami League general secretary Obaidul Quader said the movement and the ultimate failure in the election did not ring their last bell? The words and deeds of the BNP do not match. Their double standard policy is one of the main obstacles in their politics. Obaidul Quader made the remarks at a briefing at his residence on Monday (January 3).

The bridge minister said that although the BNP was talking about the war of liberation, their politics was with the anti-independence forces. The BNP talks of secularism along with communal extremism.

"Elections are the measure of what people want and don't want," he said. The Sheikh Hasina government is very sincere in holding a fair and participatory election.

Obaidul Quader said that going outside the election and looking for another lane is not in accordance with the constitution in a democracy. All these malpractices are against democratic values. BNP will come to power only if the people want.

At that time, the top leader of Awami League urged the BNP to go for elections without raising the foamy wave of rumors.

The government is obstructing the programs of the BNP in different districts - Obaidul Quader claimed that such allegations of the party leaders are 'propaganda'.

AL can't be allowed to cling to power anymore: Fakhrul 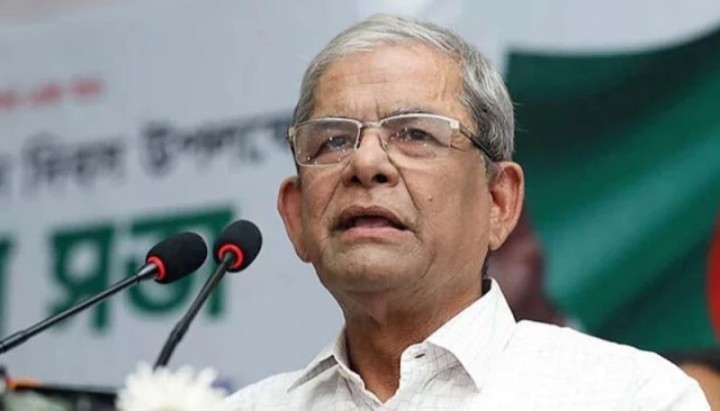 Stating that the unusual hike in fuel prices has left people in the lurch, BNP Secretary General Mirza Fakhrul Islam Alamgir on Sunday said the Awami League government can no longer be allowed to cling to power.

“This regime has destroyed our politics, economy and our potential. So it can’t be allowed to remain in power anymore,” he said.

Speaking at a rally, the BNP leader said the government has brought a disaster to the country by hiking the fuel price abruptly on Friday night as it will push up the prices of all commodities, fertilizer and other farm inputs and transportation costs.

“It’ll have a very negative impact on our economy and our economic condition will worsen further, “he warned.

Fakhrul said the government argued behind the increase in fuel prices that Bangladesh Petroleum Corporation (BPC) is incurring losses.

He slammed the information minister for his comment that the fuel prices are comparatively lower in Bangladesh than in many other countries, saying the ruling party leaders give people wrong information and statistics to confuse them. “Their every information is incorrect. So, we urge people not to get confused by false information.”

He said the fresh hike in fuel prices, especially diesel, has left the farmers, common people and bike riders in serious miseries. “But the government is least bothered about it. Because they need police, RAB, BGB and other forces, not people, to run the country. It won’t continue anymore. People of the country will no longer allow this regime to run the country in this way.”

Fakhrul alleged that Awami League has been illegally staying in power for 15 years by force using the state machinery, including police, RAB and BGB.

“You’ve already killed many people and made many others disappeared only to stay in power. In continuation of that, you have killed our Noor-e-Alam and Abdur Rahim,” he said.

“We want the government to arrest this police officer immediately and take proper action against him through a judicial investigation into the incident,” Fakhrul said. 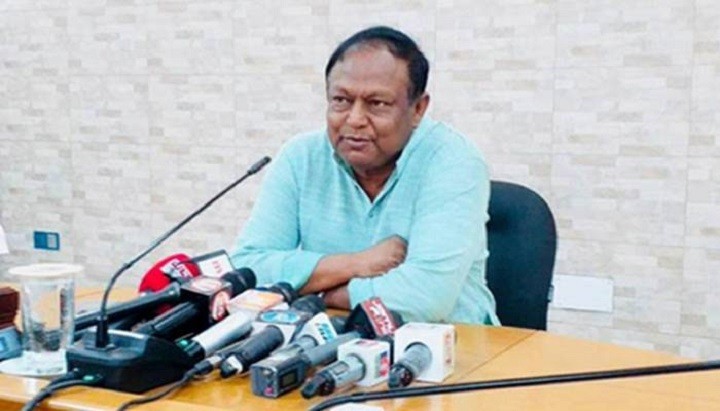 He said these things to reporters at his residence on Central Road in Rangpur on a one-day visit on Thursday (04 August) morning.

The commerce minister said that BNP saw the invitation of tea as a joke. But the matter was satisfactory. In that case BNP could have said thank you, they don't have time for tea now.

At this time, regarding the increase in the price of goods, he said, to keep the market of daily commodities normal, the government is helping one crore people with food items through family card. Any discrepancy in this card will be investigated. He assured to take legal action if there is evidence that the price of oil, sugar, dal is being sold at a higher price than the price fixed by the government from the city to the village.

At this time, the president of Rangpur Metropolitan Chamber Rezaul Islam Milon, the former president of District Chhatra League Mehdi Hasan Siddiqui Roni and the leaders and activists of Awami League's organizations were present.

The street is not a property of any person or group 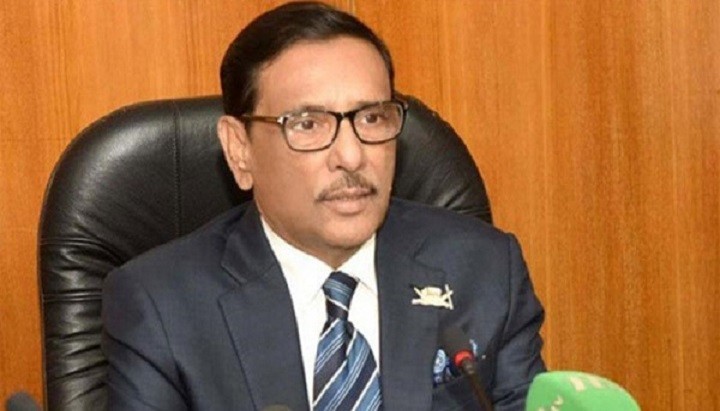 He said these things in reference to the threat of BNP leaders to occupy the streets in a briefing at Setu Bhavan in the capital on Wednesday (03 August).

Mentioning that there is no use in threatening the brave leaders and activists of Awami League to occupy the streets, Obaidul Quader further said that the Awami League has come to the government through agitations and struggles on the streets.

He said, we (Awami League) have experience of sacrifices on the streets.

Commenting that not Awami League, but BNP has a history of escaping from Bangladesh, Obaidul Quader said that acting chairman of BNP, Tarek Rahman, is a convicted fugitive who has fled abroad on bond saying that he will not do politics. Awami League has no escape history.

Claiming that the roots of Awami League formed through movement and struggle are deeply connected to the soil and people of this country, he further said that no matter how many crises and conspiracies, Awami League will remain in this country.

Awami League General Secretary Obaidul Quader warned the BNP leaders that if they again choose the path of arson and vandalism in the name of occupying the streets, a strong response will be given for the safety of people's life and property. 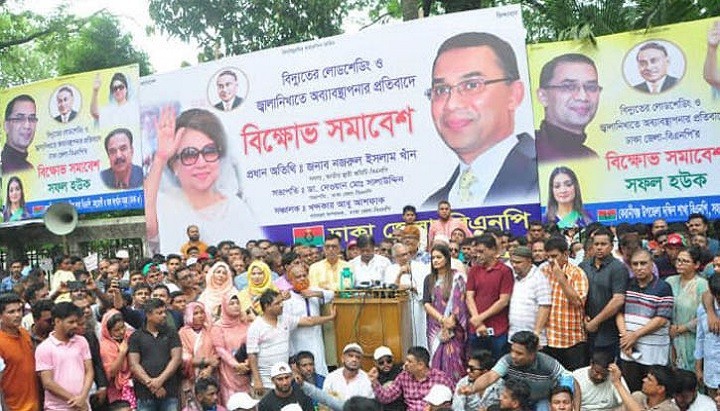 The rally started in front of the National Press Club around 10:30 am on Sunday (July 31).

Earlier from 10 am Dhaka district BNP, NGO and allied organizations leaders joined the rally in front of the press club with a procession. 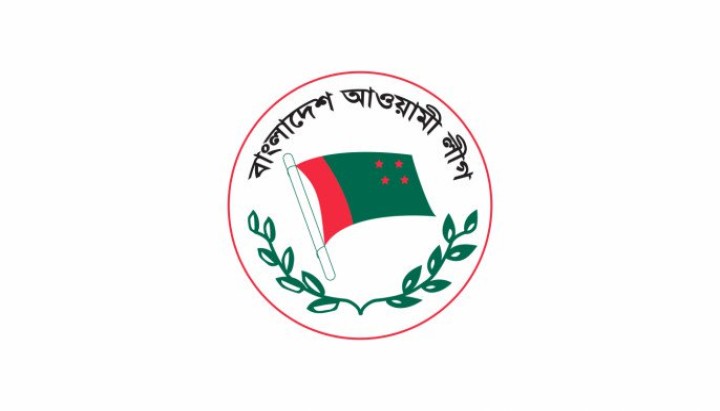 Awami League has submitted the audited account report of 2021 calendar year to the election commission office.

Later, the summary of income and expenditure of Bangladesh Awami League was presented to the journalists.

Reasons for increase in income: Sale of nomination form and sale of initial membership collection form.

Reason for Reduction in Expenditure: During the calendar year 2020, financial assistance was provided to party leaders during the Covid pandemic. But in 2021 calendar year the amount of cash disbursement was less.