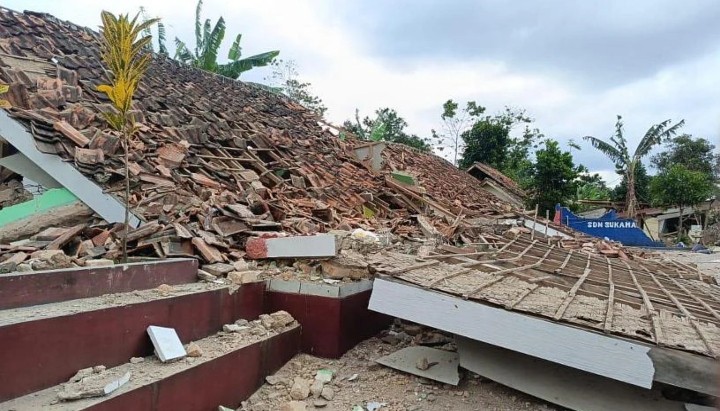 More than a dozen people were killed in a 5.6-magnitude quake that rattled Indonesia's West Java province on Monday, a local official said.

Herman Suherman, a government official from Cianjur, the town in West Java where the epicentre of the quake was located, told news channel MetroTV that up to 20 people had died at one hospital in the area.

The epicentre was on land in Cianjur in West Java, about 75 km southeast of Jakarta, and at a depth of 10 km (6.2 miles), BMKG said, adding there was no potential for a tsunami.

Muchlis, who was in Cianjur when the quake hit, said he felt "a huge tremor" and the walls and ceiling of his office building were damaged.

"I was very shocked. I worried there will be another quake," Muchlis told the Metro TV news channel, adding that people ran out of their houses, some fainting and vomiting because of the strong tremors.

Suko Prayitno Adi of the BMKG said authorities were checking the extent of the damage caused by the quake.

The United States Geological Survey (USGS) recorded the earthquake at a magnitude of 5.4 on the Richter scale. 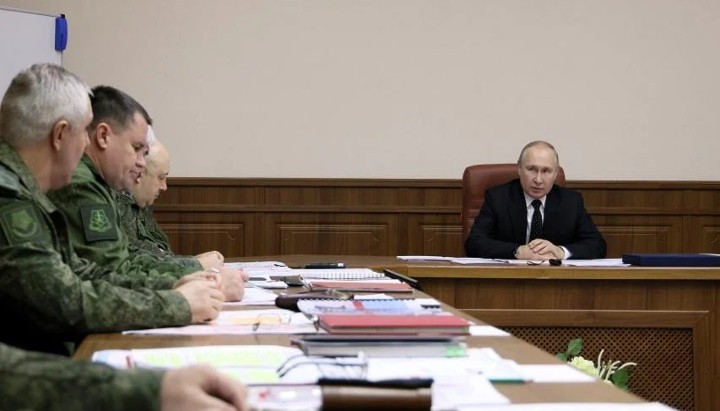 "On Friday, the president spent the whole day at the army staff involved in the special military operation in Ukraine," a statement said.

He held a meeting with Defence Minister Sergei Shoigu and Chief of General Staff Valery Gerasimov and held "separate discussions with commanders" from different defence branches, it said.

"I would like to hear your proposals on our actions in the short- and medium-term," Putin was shown as saying in the meeting by Russia's state television.

Russia launched a barrage of missiles on Friday on multiple cities in Ukraine, plunging them into darkness, cutting water and heat and forcing people to endure sub-zero temperatures.

After a series of embarrassing battlefield defeats, Russia since October has pursued an aerial onslaught against what Moscow says are military-linked facilities. US Deputy Assistant Secretary in the Bureau of South and Central Asian Affairs (SCA) Afreen Akhter has said the United States sees Bangladesh as a “truly important strategic partner" and looks forward to working over the next 50 years for a stronger relationship.

She said in the last 50 years Bangladesh-US relations have seen incredible progress between the peoples, economies and governments.

The people-to-people ties between the two countries are very deep, she said.

This is a story to really be proud of that Bangladesh has lifted millions of people out of poverty and the country will achieve the middle-income status within generations, which is truly remarkable, she said while speaking at a Victory Day function in Washington.

Beyond the economic cooperation, Afreen mentioned the close partnership between the two countries in providing COVID-19 vaccines and addressing climate change issue. She thanked the Bangladesh government for hosting some 1,1 million Rohingya from Myanmar.
The Bangladesh Embassy in Washington DC celebrated the 52nd Victory Day of Bangladesh, remembering the valiant freedom fighters who fought and made the supreme sacrifice for the cause of long-aspired independence.

To commemorate the day, the Embassy arranged a daylong program.

The day's first part of the programme began with the hoisting of the national flag ceremonially on the chancery premises in the morning by Bangladesh Ambassador to the United States Muhammad Imran.

Officials and employees of the embassy were present at that time.

A special prayer was held seeking peace, progress and development of the nation as well as eternal peace of the departed soul of martyrs of the Liberation War and Bangabandhu Sheikh Mujibur Rahman was offered.

A discussion was held later.

Ambassador Imran recalled with profound respect the greatest Bengali of all time and the founding Father of Bangladesh Bangabandhu Sheikh Mujibur Rahman.

He also paid deep homage to three million martyrs for their supreme sacrifices and two 2 lakh women who sacrificed in 1971.

The day’s other program ended with a colourful cultural function. 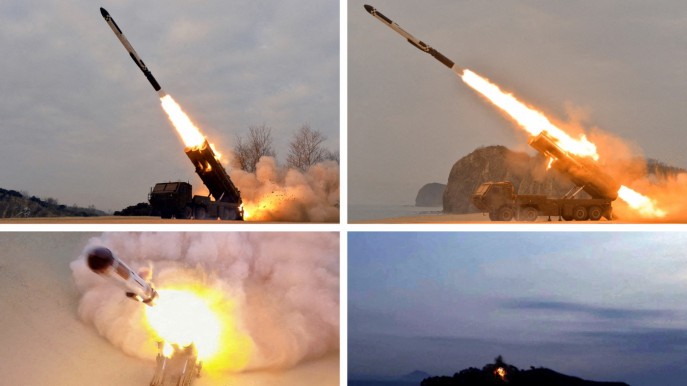 North Korea fired around 130 artillery shells into the sea off its east and west coasts on Monday, South Korea's military said, in the latest apparent military drill near their shared border.

Some of the shells landed in a buffer zone near the sea border in what Seoul said was a violation of a 2018 inter-Korean agreement designed to reduce tensions.

The South Korean military sent several warning communications to the North over the firing, the ministry of defence said in a statement.

North Korea did not immediately report on the artillery fire, but it has been carrying out an increasing number of military activities, including missile launches and drills by warplanes and artillery units.

South Korea and the United States have also stepped up military drills this year, saying they are necessary to deter the nuclear-armed North.

The 2018 Comprehensive Military Agreement (CMA) was the most substantive deal to come from the months of meetings between leader Kim Jong Un and then-South Korean President Moon Jae-in.

With those talks long stalled, however, recent drills and shows of force along the fortified border between the Koreas have cast doubts on the future of the measures. South Korea has accused the North of repeatedly violating the agreement with artillery drills this year.

This year North Korea resumed testing of its long-range intercontinental ballistic missiles (ICBMs) for the first time since 2017, and South Korea and the United States say it has made preparations to resume nuclear testing as well.

A Group of Seven (G7) price cap on Russian seaborne oil came into force on Monday as the West tries to limit Moscow's ability to finance its war in Ukraine, though Russia has said it will not abide by the measure even if it has to cut production.

The G7 nations and Australia on Friday agreed a $60 per barrel price cap on Russian seaborne crude oil after European Union members overcame resistance from Poland. Russia is the world's second-largest oil exporter.

Ukrainian President Volodymyr Zelenskiy said the world had shown weakness by setting the cap at that level while Russian Deputy Prime Minister Alexander Novak said on Sunday it was a gross interference that contradicted the rules of free trade.

"We are working on mechanisms to prohibit the use of a price cap instrument, regardless of what level is set, because such interference could further destabilise the market," said Novak, the Russian government official in charge of its oil, gas, atomic energy and coal.

"We will sell oil and petroleum products only to those countries that will work with us under market conditions, even if we have to reduce production a little," he said.

The G7 agreement allows Russian oil to be shipped to third-party countries using G7 and EU tankers, insurance companies and credit institutions, only if the cargo is bought at or below the $60 per barrel cap.

Industry players and a US official said in October that Russia can access enough tankers to ship most of its oil beyond the reach of the cap, underscoring the limits of the most ambitious plan yet to curb Russia's wartime revenue.

According to Zelenskiy, the $60 cap would do little to deter Russia from waging war in Ukraine. "You wouldn't call it a serious decision to set such a limit for Russian prices, which is quite comfortable for the budget of a terrorist state."

The United States and its allies have imposed sweeping sanctions on Russia since it invaded Ukraine on February 24 and sent billions of dollars in aid to the Ukrainian government.

French President Emmanuel Macron, however, drew criticism from Ukraine and its Baltic allies over the weekend for suggesting the West should consider Russia's need for security guarantees if it agrees to talks to end the war.

Zelenskiy's aide, Mykhailo Podolyak, said the world needed security guarantees from Russia, not the other way around.

In Ukraine, Russia has been pounding power infrastructure since early October, causing blackouts and leaving millions without heating as temperatures plummet.

Russia says the assaults do not target civilians and are meant to reduce Ukraine's ability to fight.

Ukraine says the attacks are a war crime.

Zelenskiy, in a video address on Sunday, urged citizens to be patient and strong in resisting the rigours of winter.

"To get through this winter, we must be even more resilient and even more united than ever," he said.

Kyiv Mayor Vitaliy Klitschko said on Telegram that blackouts would be confined from Monday to planned "stabilisation" cutoffs to get the grid working again, but added the situation remained "difficult".

In Kherson, largely without power since Russian forces abandoned the southern city last month, the regional governor said 85% of customers had electricity.

On the battlefront, Zelenskiy said Ukrainian forces were holding positions along the front line, including near Bakhmut, viewed as Russia's next target in their advance through Donetsk.

Ukraine's military said Russian forces were pressing for improved tactical positions to advance in the Bakhmut and Avdiivka directions. About 16 settlements, including Bakhmut and Avdiivka, were shelled by tanks, mortars, barrel and rocket artillery, the General Staff of Ukraine's armed forces added.

Russia's defence ministry said its troops were conducting successful operations in the area of Bakhmut and had pushed back Ukrainian attacks in the Donetsk direction.

Russian-installed officials in the occupied Donetsk said Ukraine fired at least 10 Grad rockets into the city. There was no word on casualties.

In Kryvyi Rih, among the largest cities in southern Ukraine, Russian rockets killed one person and wounded three just after midnight, the governor of the Dnipropetrovsk region, Valentyn Reznichenko, said.

"They aimed at an industrial enterprise," Reznichenko said on the Telegram messaging app without giving details.

The head of US intelligence said fighting in Ukraine was running at a "reduced tempo" and that militaries on both sides were looking to refit and resupply to prepare for a counter-offensive after the winter.

The attackers stormed the mosque in Maigamji village, in Katsina state, during evening prayers Saturday and carried out the kidnappings after shooting and wounding the imam and another worshipper, said local police spokesman Gambo Isah.

"Our men mobilised and went after the bandits and succeeded in rescuing six of the worshippers from their abductors, while efforts are underway to free the remaining 13," he added.

The two people wounded were being treated in hospital, he added.

Northwest and central Nigeria have been terrorised by criminal gangs locally known as bandits, who village raids steal cattle, kidnap for ransom and burn homes after looting supplies.

Hostages are usually released after a ransom is paid to the gangs, which take refuge in the vast Rugu Forest. It straddles four states in northwest Nigeria, including Katsina.

Last month, 15 people were killed and several others wounded in a series of bandit attacks on villages in neighbouring Kaduna state, say the authorities.

Nigerian President Muhammadu Buhari has been under intense pressure to end the violence before he leaves office next year at the end of his eight-year tenure in office.

There is growing concern over an alliance in the northeast between the bandits and jihadists waging a 12-year insurgency to establish a Caliphate.